Monoecious; flowers on long, white spikes between May and September; from Peterson’s Field Guide: Eastern/Central Medicinal Plants and Herbs: “Seeds require a warm period to break radicle dormancy and a cold period to break epicotyl dormancy.” “Under normal conditions, complete germination (both radicle and epicotyl) can occur in 6 months.”
Can be effectively reproduced through rhizome cuttings, which could lead to sustainable farming practices of Actaea racemosa.

Ability to withstand disturbance and over harvest:

Since the part of the plant used and harvested is the root system and the larger rhizomes, Actaea racemosa lacks the ability to quickly regenerate populations after heavy disturbances or harvesting.

Status of Endangered/Threatened (by state):

Endangered in Illinois and Massachusetts.

Vulnerability of habitat/changes of habitat quality and availability:

Development and logging continue to impact the Eastern Hardwood region of our continent. This impact weakens or removes entire populations of Actaea racemosa and threatens the genetic diversity within these populations and the species as a whole.

Annual harvest of Black Cohosh can equate to as much as 500,000 pounds in dry weight per year, 97% of which is sourced from wild habitat.
In-depth information on amount sold, prices by weight, and international trade of Actaea racemosa can be found in the “Wild Harvest” and “Industry Report” sections of Mary L. Predny, et al. “Black Cohosh: An Annotated Bibliography.”

Wild Harvesting Impact On Other Species:

Due to the massive demand for Black Cohosh and the similarity in appearance of North America’s eastern Actaea species, the wild harvest of Black Cohosh is having a dramatic impact on populations of plants that are mistakenly harvested. Black Cohosh (A. racemosa) is often confused with Mountain Bugbane (A. podocarpa), White Baneberry (A. pachypoda), and Appalachian Bugbane (A. rubifolia). A. podocarpa has been listed as endangered in Illinois and rare in Pennsylvania; A. pachypoda is listed as exploitably vulnerable in New York; and A. rubifolia is threatened in Illinois, Kentucky, and Tennessee and endangered in Indiana. This is all due to habitat loss and wild harvest, which is only exacerbated by misidentifying and harvesting them as Black Cohosh.

Recommendations for industrial and home use:

Cultivated harvest would be the best option to take to maintain a secure and diverse wild population. As better population surveys are completed throughout its range, bans on wild harvest of Actaea racemosa should be applied where appropriate. 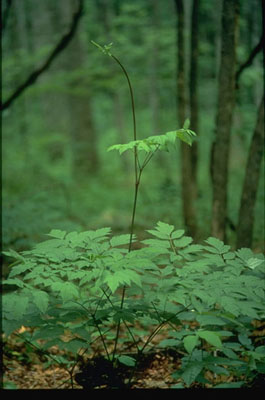 Black cohosh was one of the many important and distinctive remedies that the pioneers learned about from the Native Americans. Members of all the important medical schools of the nineteenth century, including the allopaths, homeopaths, Eclectics, and physio-medicalists, used it. It has proven to be a widely useful medicine. It not only acts on important common physical problems but also has properties that run in a deep psychological vein. Today it is still widely used, both by the more scientific phytotherapists and the traditional community of herbalists drawing on expanded lore.

Black cohosh can easily be grown from seeds. It can also be propagated by breaking up the crown, but this is more tedious and does not yield as many plants. The seeds need to be stratified in a sequence of warm temperature, followed by cold for several months, and then warm again. The reason for this is to mimic the conditions of the central temperate region, where black cohosh grows wild, ripening its seeds in midsummer. It can be sown in the ground right then and will sprout the following spring.
Farther north it does not ripen its seeds until August. This seems to be a limiting factor, causing it not to propagate naturally in the climes, since the seeds need warm, cold, warm stratification. If you do this artificially, the seeds will be ready to sprout in the spring.

Although Cimicifuga is native to woodlands, it is readily cultured in the sunlight, hence it can be grown fairly easily as a crop. This is important, since it is widely used in traditional and modern herbal medicine. This is one plant we should not be exterminating in the wild. 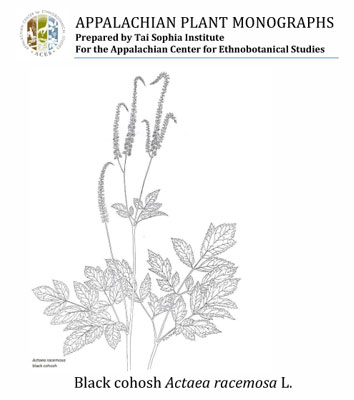 This plant has been adopted by