The conservation of native plants, especially those experiencing threats and population declines, is dependent on accurate information about each species location, population health, and protection needs. In cooperation with Natural Heritage Programs in each U.S. state, Canadian Conservation Data Centres, and other collaborators, NatureServe uses a long-standing, standardized, and vetted methodology to evaluate each plant species for its risk of imperilment and conservation priorities. To carryout species-specific assessments at the state/provincial, national, and global levels, the Botany Department develops and maintains the taxonomic, geographic, ecological, and conservation data that determine priorities that support the protection and management of the rarest and most vulnerable plant species. Information on species native to the U.S. and Canada can be accessed on NatureServe Explorer (explorer.natureserve.org).

Life on Earth depends on plants: they are the foundations of ecosystems and important habitats, and critical sources of food, oxygen, and medicine. Globally, about one in five plants is estimated to be at risk of extinction (Kew 2016). In the United States and Canada, more than 30% of vascular plant species are currently vulnerable to extinction (NatureServe 2017). Plants continue to face threats such as habitat loss and degradation, invasive species, overpopulation, and climate change (Kew 2017, Hernández-Yáñez et al. 2016). Without an increased focus on plant conservation, we risk losing plant diversity.

Despite their importance, and ongoing decline, plants are consistently underrepresented—and sometimes completely absent—in conservation plans and associated funding streams. For example, even though nearly 60% of species on the US Endangered Species List are plants, they consistently receive less than 5% of State and Federal funding (Negron-Ortiz 2014).  At the state level, species conservation is often implemented through State Wildlife Action Plans, which establish a framework for protecting species before they become endangered (Stein and Gravuer 2008). However, only 15 U.S. states and territories have included plants in their lists of Species of Greatest Conservation Need, and were prioritized using conservation tools.

NatureServe’s Botany Department compiles and maintains extensive data on the taxonomy, distribution and conservation status of plants and selected fungi, lichens, and algae of the United States and Canada, with a focus on species that are most imperiled. Using a shared data structure, NatureServe network member programs collect and manage information on the location and conservation status of taxa in their jurisdictions. NatureServe Explorer (explorer.natureserve.org), an online encyclopedia, provides detailed information on more than 65,000 plants, animals, and ecosystems of the United States and Canada from our collective, multijurisdictional database.

Species information on NatureServe Explorer includes NatureServe’s Conservation Status Assessments, or Ranks. These Ranks evaluate the potential extinction or extirpation risk of a species by systematically analyzing factors grouped into three factor groups: rarity, threats and trends (Faber-Langendoen et al., 2012; Master et al., 2012). Ranks are completed at three nested, geographic scales: Global (G), National (N), or Subnational (S). By indicating species imperilment at multiple scales, governments are better able to allocate resources for the most imperiled species in their respective jurisdictions while considering a species overall risk of extinction (Faber-Langendoen et al. 2012). For example, comparing the Subnational (state or provincial rank), or Sranks, to the Global, or Granks, provides information on jurisdictions within a species range that may be more vulnerable than others (Figure 1). 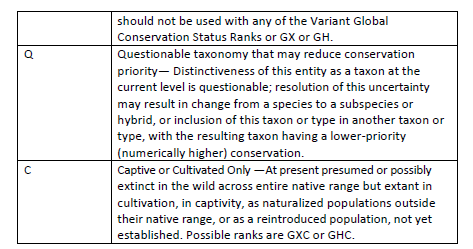 Conservation status assessments are completed by scoring up to ten rank factors categorized into rarity, threats, and trends (Figure 2). The rank factors are summarized in Master et al. (2012), while the methodology for assigning ranks is detailed in Faber-Langendoen et al. (2012). The Conservation Rank Calculator is an automated tool in Microsoft Excel that ensures the accurate application of the ranking methodology. Use of the tool improves the reliability, transparency, and consistency of the ranking process by applying an algorithm to implement the standard methodology.

NatureServe Network’s methodology for assigning conservation status is intended be transparent, consistent, rigorous, and scientific. The rank factors and rank reasons are behind each assessment are freely available on NatureServe Explorer (explorer.natureserve.org). For example, the reasons given for Trillium persistens’ Global Rank of G1G2 are that it is a narrow endemic, known from a single drainage straddling the border of Georgia and western South Carolina. A large, contiguous population formerly extended along the river banks before major dams and reservoirs inundated former habitat and fragmented the range. The species account also includes information on the number of occurrences, population size, threats, and trends. In addition to gathering data necessary to assign a conservation status Rank, NatureServe also compiles information on the taxonomy, ecology, life history, management, and economic attributes of a species. This information is also freely available on NatureServe Explorer.

We would love to get your feedback on how we can improve your experience as a member! Please take a moment to complete our survey. 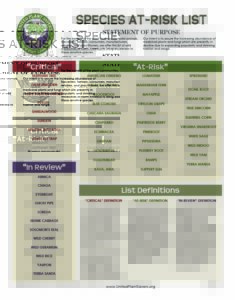 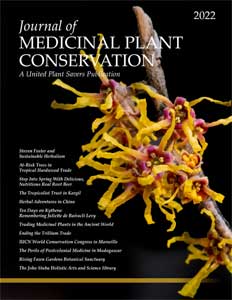 Get Your FREE Journal of Medicinal Plant Conservation

Enter your name and email address to download now. 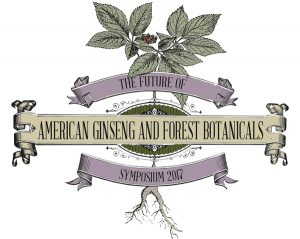 Get the full proceedings from the Future of Ginseng Symposium

Enter your name and email address to download now.

Get Your FREE Forest Farmers Handbook